Social Policies on Housing in France and Germany

Social Policies on Housing in France and Germany: A Comparative Analysis

Housing has been and continues to be a vital sector of the economy of developed societies across the world (Sassen 2012). Housing contributes to the economy in three main ways; as part of the construction sector, as part of the real estate market, and through banking in the form of mortgages. Today housing is also an used as an instrument for the innovation of financial instruments and in this regard has raised the distance between itself  and the asset that underlies it to the extent that it is associated with high-risk financial innovation (Sassen, 2012).  Appreciating its importance, different countries have put in place different social policies in a bid to ensure that their nationals are properly housed and that even the poor do not remain homeless. This paper presents a comparative analysis of the housing policies implemented by French and Germany. The paper presents an overview of the housing policy in the two countries, their guiding principles, housing ownership, the cost of housing, security of tenure, housing benefits, and the financing of private and social housing. The paper also discusses issues such as subsidies and housing allowances in France, role of government and NGOs, beneficiaries of social housing, regeneration, and the Anglo Saxon Liberal Welfare Regime in Germany.

As noted by Blanc (2004), France is known to be a centralised nation with officers at the central government making most of the decisions that touch on social policy.  The government of France normal moves with speed in trying to solve problems, a situation that has led civil society in the country to have great mistrust for the government. After the Second World War ended, France realised that she was faced with housing shortage. Consequently, the government emerged as a dominant player in trying to solve the housing problem in the period preceding the 1960s. However, in the 1960s, the government opted to become more indirect while maintaining its economic intervention, a change that was  influenced by the appreciation of the neo-liberal ideology (Blanc, 2004). Read more … 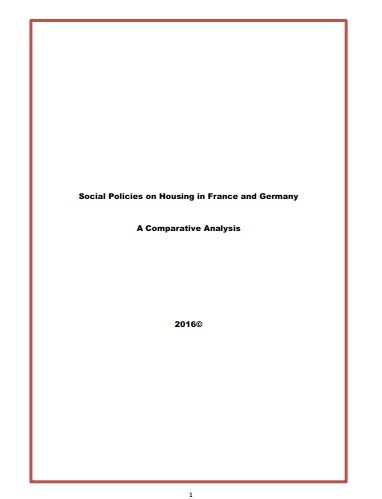